A new GNHRE Report on Human Rights and Climate Change, drawing on the PPT’s Advisory Opinion, has been submitted to UN Special Rapporteur…   Read more...

“It matters,” she says, “to tell the truth in a public place. It matters to affirm universal standards of right and wrong, to clearly say…   Read more... 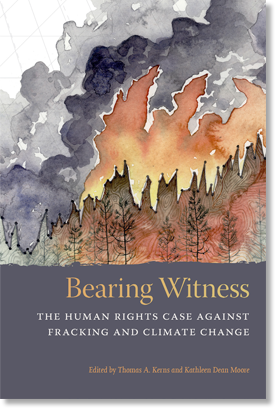 On May 14, 2018, a respected international human-rights court, the Rome-based Permanent Peoples’ Tribunal, began a week-long hearing on the impacts of fracking and climate change on human and Earth rights. In its advisory opinion, the Tribunal ruled that fracking systematically violates substantive and procedural human rights; that governments are complicit in the rights violations; and that to protect human rights and the climate, the practice of fracking should be banned.

What Is The Permanent Peoples’ Tribunal?

The Permanent Peoples’ Tribunal, based in Rome, is an internationally recognized Civil Society public opinion tribunal functioning independently of state authorities. It applies internationally recognized human rights law and policy to cases brought before it. The PPT is a descendant of the 1967 Bertrand Russell-Jean Paul Sartre Vietnam War Crimes Tribunal, and hears cases in which prima facie evidence suggests abridgement of basic rights of ordinary people.

What Is This Session About?

The Permanent Peoples’ Tribunal has scheduled a Session on the human rights impacts of fracking and climate change with hearings scheduled for the week of May 14-18, 2018. Hearings will be conducted fully online, using Zoom conferencing software, so that anyone anywhere in the world will be able to login and view the proceedings in real time.

Previous work relevant to the human rights dimensions of fracking and climate change includes two previous HRIAs (one for New York state, one for the United Kingdom), a Compendium of scientific and other findings on fracking, and the United Nations Knox Report on human rights and the environment.